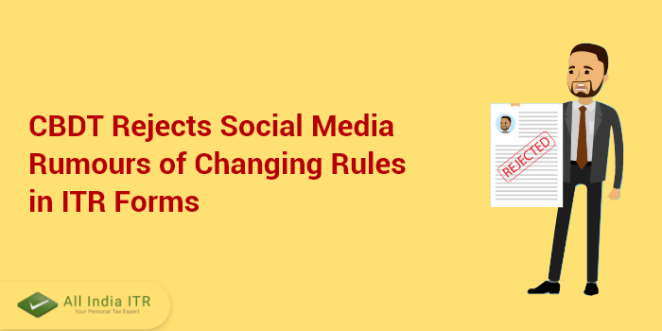 The Central Board of Direct Taxes (CBDT) on Tuesday refuted reports in social media about changes being executed in ITR forms 2 and 3. The income tax department stated that only the utility software has been updated which is not going to hamper the filing of returns. Meanwhile, there were reports in social media that the taxpayers were facing difficulties in efiling of income tax return in ITR-2 and ITR3 for the financial year 2018-19 due to wide-scale amendments in the ITR form for the AY 2019-20

The income tax authority has clarified that the software utility for e-filing of all the ITR forms has been released long back on 2nd May and on 10th May 2019 respectively. However, the software utility update is a dynamic process and is continuously taken up as per the feedback received from the users/filers to ease their experience in electronic filing of returns.

Besides with this, it has further clarified that the updating of utility does not hamper filing of return as the taxpayers are allowed to file ITR using the utility which is available at that point of time. Even though the utility is being updated regularly to provide ease to taxpayers, the returns filed by using the previous version of utility will continue to be valid. It is pertinent to state that the updation in the utility of ITR forms is based on feedback and mainly aimed at easing the compliance burden of the taxpayers by facilitating easier e-filing. For instance, this year, the facility of pre-filling of return forms has been provided based on the information furnished in the TDS statements.

This facility has been updated in the utility subsequently. This would substantially reduce the efforts of taxpayers in filling of return forms. It is reiterated that there are no changes in the notified ITR forms; only the utility has been updated to facilitate the taxpayers. Therefore, the assertion that numerous changes have been made in ITR-2 and ITR-3 on July 11, 2019, does not give a correct picture.

For more details about file income tax return visit us at https://www.allindiaitr.com